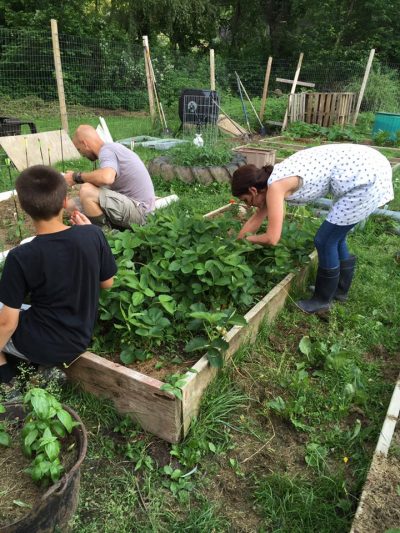 Now is Not the Time to Cower

Everywhere we look people are shouting that the sky is falling. But really, if it were, then we would have all been buried by the sky long ago, because quite frankly, since the beginning of time there have always been plagues, wars, famine, earthquakes, turmoil, disease, violence, and more. And generation after generation has gone on. Because we are living in a sinful world. We aren’t in Heaven, yet!

Yes, the world is crazy. One look at my newsfeed on any social media confirms that. Yes, it’s heavy. Yes, it feels dark and burdensome. Downright scary at times.

But have we forgotten our God? God is on the throne. He is in control. He hasn’t given up His authority. And He has seen generation after generation walk through tragedy, struggle, and despair.

Do you know the “Black Death” plague killed 75% of the world’s population? Not downplaying the times we are living in, but that’s no joke. Three-fourths of your family wouldn’t survive. That’s mind-blowing.

Yet humanity has continued.

There is no promise that our generation will have it easy. In fact, I look at my grandparents’ generation and they survived two world wars, a depression, a plague, and more. It has never been easy. But they were built differently. They persevered. They were hardy. They didn’t cower.

And we shouldn’t either.

Because we have a God that is with us through every single trial. In fact, He knew the trials were coming. And He knows the outcome of each one to come. He has a purpose and a plan for it all.

I was sick two months ago and my realization afterward was, that didn’t kill me but something else will. We need to live like that! That something WILL kill us eventually. I mean none of us gets out alive.

But for those in Christ, we do! And the knowledge that there are others who don’t know that Truth, should be what spurs us on. Not our own comfort and safety.

We should be as concerned for people’s souls as we are for the latest headline to share. We are so quick to argue about the latest topics but don’t share the Gospel. Do we love our neighbors enough to tell them about Jesus? And with a world growing darker each day, is our primary concern for our safety or for others’ souls?

There is a passage in Jeremiah that speaks to this very truth. The people are in exile in Babylon and God is showing them what to do in the midst of it:

He isn’t saying, “Sit and wait for the exile to end. Wait for fo suffering to end to look to the future. Stop living until it’s safe.”

When I read this I notice he says, to build gardens. And that shows hope for the future. You don’t plant a garden if you think there will not be a future. And He says to marry and increase. Build the future. Trust the Lord. Do what He says.

So, today, don’t cower. Keep living. Keep trusting the Lord, regardless of the circumstances. And build His Kingdom, not just your own little kingdom. Because He IS coming back! 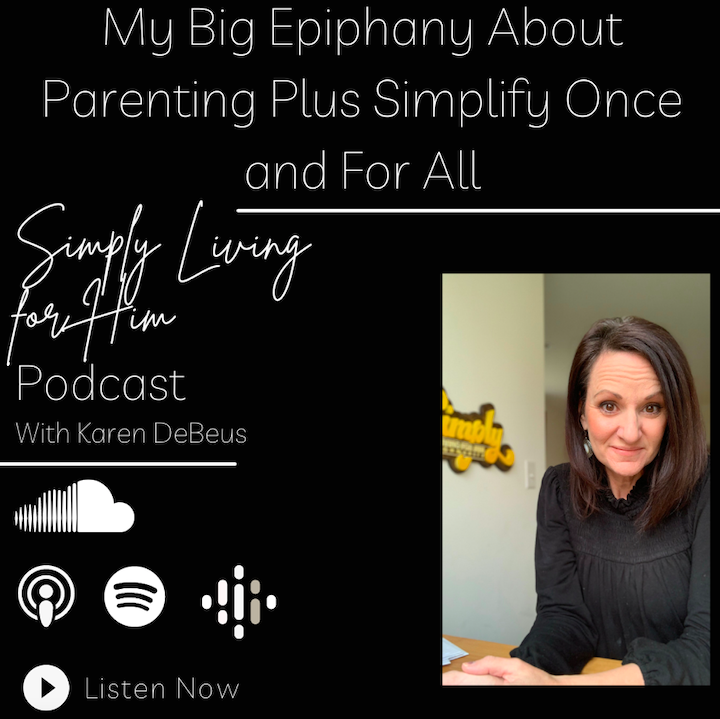 My Big Epiphany About Parenting PLUS Simplify Once and For All!

this podcast is sponsored by Apologia

Today is a sort of “podcast mash-up.” I am sharing on a few different topics- homeschooling didn’t save my children, simplifying once and for all in the new year, and most importantly, the BIGGEST parenting epiphany I have ever had! You don’t want to miss this!

NOW ON ANCHOR! Come leave me a message! 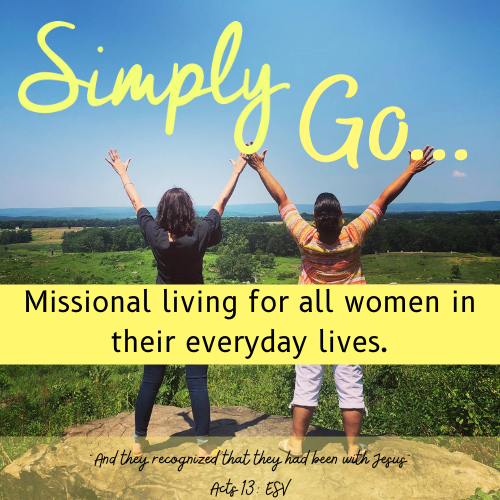 Simply Go, Simply...Living For Him

Simply Go! in the New Year

Last year we began an initiative at Simply Living for Him called “Simply Go!” My intention was to provide a space on the blog to share encouragement and ideas or resources to help women be missional in their everyday lives. You do not have to go around the world to be a missionary. In fact, you ARE one in your life every day. First at home and then in your community.

Well, 2021 became a crazy year, and that initiative got put on the backburner. But I do hope to start back up here and provide blog posts and encouragement again in this area. This world needs JESUS!! This world is getting darker each day. And really, the only thing that will change the world is Jesus. Changed hearts will change the world! So today, I want to share with you SIMPLE ways to be missional every day.

The first and most important thing I want to remind you is this: Disciples make disciples. The most important thing you can do to share Christ is to spend time with Him yourself. Because when you do, people see that in you naturally. You don’t even have to say a word. They will see Him and want to know more. Building a relationship is the bridge to sharing the Gospel.

One of my favorite passages in the Bible describes this so well with the early disciples:

“Now when they saw the boldness of Peter and John, and perceived that they were uneducated, common men, they were astonished. And they recognized that they had been with Jesus. Acts 4:13 ESV“

Do people recognize you have been with Jesus?

If you want to be missional and share the Gospel, don’t try so hard. The Holy Spirit will be evident in you and will give you the words when needed. Your job is simply to fill up on the Word, spend time with Him, and be in prayer. Let the Spirit work in you. Don’t try to be the Spirit in someone’s life. But overall, the best thing you can do is spend time with the Lord yourself.

Send a card: Let’s go back to the old days- send a handwritten note. Take time to write a letter or a card, not for any reason but to let someone know you are thinking of them. Add a Bible verse and note of encouragement. People want to know that they are thought about. And are loved.

Drop something on the porch: A flower arrangement, a coffee, a treat, or some groceries…anything to let someone know they are thought about and they are cared for. It doesn’t have to be big to show someone they are loved. Even better, do it anonymously!

Call someone: Oh, how late 1990s of me to suggest this! I know many of us (myself included) have a love-hate or hate-hate relationship with the phone! Why is that? I have no idea. But let’s get over ourselves. Sometimes hearing another voice at the end of the line is so necessary. Ask them, “How can I pray for you today?” Then do it. If they’re not the praying type, don’t worry about making them uncomfortable. The Spirit is at work, remember? Not you. Let them feel that love at the moment. As uncomfortable as you think it will be, imagine their surprise when someone loves them enough to pray! Their uncomfortableness is with it being something new to them, not with you!

Run an errand: Many folks can’t get out these days, so while you are running errands, ask if you can pick something up for them? A simple act that can mean so much.

Lastly, SMILE. Be positive. There is enough negativity in the world. And smiles are contagious. And the GOSPEL is contagious. But a negative and complaining Spirit doesn’t draw people to HIM. So focus on HIM, smile, and share the love!

Do you have any ideas to add? Let’s encourage one another. Leave your ideas in the comments! 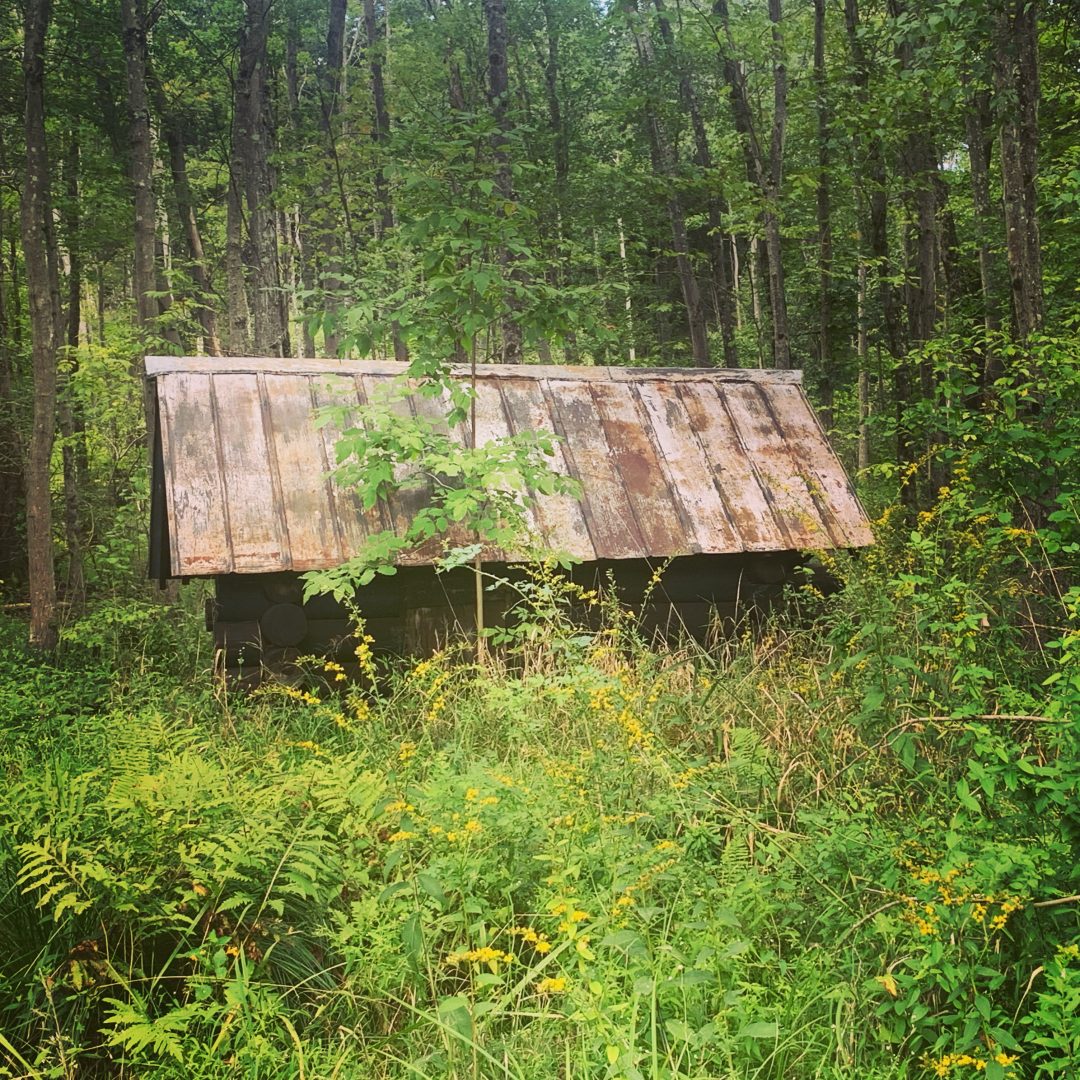 As I spent time in prayer this morning, the first morning of a “normal” week of the new year, so many things came to the surface.

I spend a lot of time riding the roller coaster of life. Circumstances change quickly as do my emotions. And it is part of being human. Emotions are not bad in and of themselves (God created them in us) but I think knowing what to do with them is important.

But what if we looked at things differently? What if we stepped outside of ourselves and our inward focus and truly were God-focused?

My go-to is to focus on me.

What does this mean for me?

How does this affect me?

I’m done with me. I want to live  for him

If I could for one minute stop focusing on me, the immense power of Him wins. He is in control of my life (not my emotions), but for His purposes, not mine. Because that’s where the waters get muddy. We want him to be in control with the hopes that it goes according to our plan. But His plan is always better. His purposes always prevail.

I’m walking into 2022 open-handed. Giving up my hopes, dreams, and plans for the far greater purpose and plan of the great Creator God.

He was jailed- He worshiped! Let it be so for me. In all things, worship and praise because I am free in Christ. It is no longer I who live, but Christ in me.

God has been teaching me this for years but it seems I always get distracted by myself. So today I am writing it out. To hold myself accountable.

Are you with me? Are you ready to fully let go of your life because you trust in the One who made it?

Let’s do it. Let’s get over ourselves and live for Him! 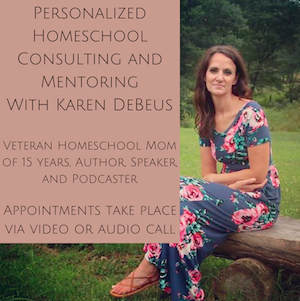 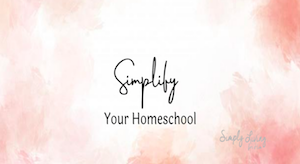 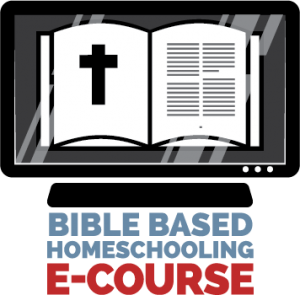 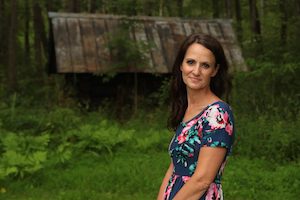